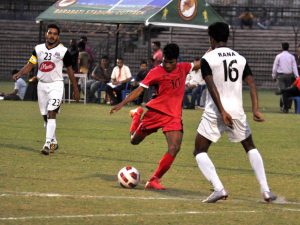 Mohammedan Sporting Club bow out from the 2016 Kalinga Cup after losing 4-5 in sudden-death against Army XI in the second semifinal played at the Barabati Stadium in Cuttack on Tuesday.

Going into the game, Mohammedan Sporting made three changes to the side that beat BSF in the quarterfinals. While Sourav Chakraborty replaced Sheikh Sadekuddin under the bar, Sheikh Faiaz and Basanta Singh came into the starting XI replacing Pritam Singh and Imran Khan respectively.

Right from the start both teams played some spirited football, but despite several close chances on either end, both teams failed to break the deadlock in the regulation time.

Mohammedan Sporting had their chances through James Moga and Ajay Singh who could not capitalize those, while for Army XI Anthony Chhetri hit the crossbar and Arjun Tudu’s shot was saved by Sourav Chakraborty.

During the penalties Sourav Chakraborty denied Army XI on two occasions but Ajay Singh, Tanmoy Ghosh, James Moga and Rana Gharami wasted their efforts which saw Army XI emerge victorious and now the Armymen would take on Bidanasi Club in the final tomorrow.