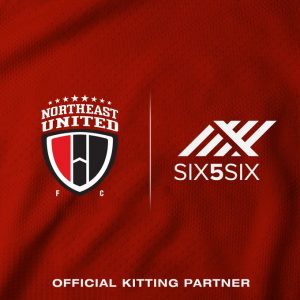 The sportswear company, which believes in a design first approach, focuses on creating the feeling of inclusivity amongst fans, athletes and all the stakeholders, it said. With every design telling a story, Six5Six will be designing the team’s home and away kits, practice kits as well as entire fan merchandise, taking the community aspect into consideration.

“We are delighted to partner with the NorthEast United FC, a club which comes from a region which has contributed immensely to Indian football. We want to craft something unique keeping the ethos of the Highlanders in mind. We are looking forward to this exciting and fruitful partnership” Ambar Aneja, co-founder and CEO, Six5Six, said.

The new kits are expected to be launched prior to the commencement of the upcoming season of ISL and will be available on the brand’s website, as well as certain key retailers in the region. Moreover, this partnership with NorthEast United FC is Six5Six’s second club partnership in the ISL, after announcing Kerala Blaster FC last month. They are also the official kit partner of the All India Football Federation.

“We are excited to start a new chapter with SIX5SIX. They are the official kitting partner of the Indian National Team as well, so they understand the feelings and emotions of football fans, and this gives us confidence about what kind of products they can provide to our fans and players,” said Priya Runchal, CEO of NorthEast United FC.