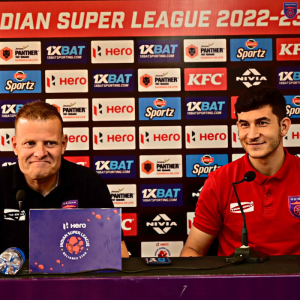 Josep Gombau and Saul Crespo attended the pre-match press conference and briefed the media ahead of their game tomorrow against NorthEast United FC.

The team has been performing well for the past few games. What is your take on the game against NorthEast United FC?

Josep Gombau: Our approach towards this game stays the same. We have a lot of respect for NEUFC. They have been playing well in the last few games and are a tough opponent. Every game that is played in the league is difficult. We are taking this game very seriously and have been training with the same intensity. I expect that the game will be tough and it is not going to be easy. We will have to work very hard tomorrow if we want to win.

We have seen Odisha FC make brilliant comebacks this season. How much of an effect does it have on the mentality of the players?

Josep Gombau: As a team, we want to win when we play but it is not possible all the time. We are winning because we have a very strong mentality that I keep talking about to the players in every training session. We as a team fight till the end and the boys give their everything on the pitch. This is football at the end of the day and we can’t every single game but what we can assure is that we will work till the end until the final whistle is blown.

Nandha has been in fine form this season and has scored three goals in four games. What do you have to say about his performance?

Josep Gombau: I don’t need to say anything about Nandha. Everyone can see what he is capable of. He is a very special player and is extremely talented. With the way we play football and the style we try to emulate on the pitch with open wingers, Nandha fits perfectly into that role. He has a lot of potential and a bright future ahead of him. Nandha is in good form because the team around him is also playing well. I am happy with him and the boys but I have to also mention Jerry because he is another important player for us. He has been doing well. The boys work very hard during the game with the ball and without the ball so it is overall a team performance.

How has your experience been playing in India and in the Indian Super League?

Saul Crespo: It has been good and I have really enjoyed my time in India. The league is very competitive and there is a lot of potential that I see in the Indian players. Indian Football is growing and I am privileged to be a part of it.

You have been playing well under the coach and his system. How has it been so far working under Josep?

Saul Crespo: I am really grateful to be playing under coach Josep Gombau. I have learned a lot from him in training over the past few months. He has helped me grow as a player and how I play. I believe in him and hope that we can pull off something special this year.