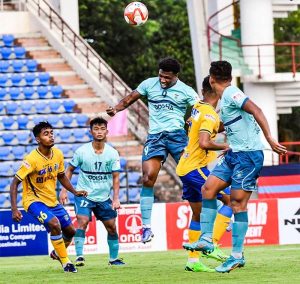 Odisha FC continued their fine form in a 2-0 win over Kerala Blasters in a sunny afternoon fixture at the Indira Gandhi Athletic Stadium in Guwahati today.

A slow first half was followed by a lively second that saw Odisha FC run through the gears to find the breakthrough. Isaac finished a lovely bit of play from Diego, who used his strength and speed to find his teammate in the box in the 51st minute.

Osama Malik came on to make his Odisha FC debut with half an hour to go and showed great composure and maturity to keep the play ticking from the middle of the park.

Osama teamed up with his midfield partner ten minutes later as he headed the ball towards the Kerala Blasters goal. The ball took a deflection and found Saul who had an easy tap-in to make it 2-0.

Odisha will look to keep the momentum going as they face Sudeva Delhi in their third Durand Cup fixture on Monday, August 29 at 6pm IST.

You can watch the match on Sports18 1, Sports 18 1HD, and Sports18 Khel for Hindi commentary. Live streaming of the Durand Cup 2022 will also be available on VOOT and JioTV.