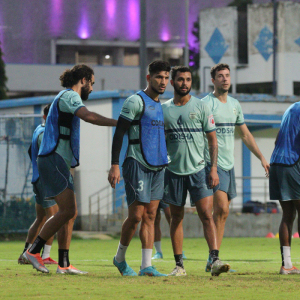 The Juggernauts will look to keep their winning streak intact as they face Bengaluru FC in the Durand Cup quarterfinals.

The boys landed in Kolkata on September 5 and started training two days later after a short rest. Head Coach Josep Gombau has left no stones unturned while preparing for the game against Bengaluru FC. Jerry and Saul have been crucial to the team contributing a total of six goals and Josep will be counting on them to replicate their performances later today against the Blues.

Bengaluru FC had been drawn alongside Jamshedpur FC, FC Goa, Indian Air Force FT, and Mohammedan Sporting in Group A, of the group stage in the Durand Cup and finished runners-up behind the Black Panthers.

Odisha FC plays Bengaluru FC at 6pm IST on Saturday, September 10. You can watch the match on Sports18 1, Sports 18 1HD, and Sports18 Khel for Hindi commentary. Live streaming of the Durand Cup 2022 will also be available on VOOT and JioTV.