Odisha FC hoping for an improved performance against Chennaiyin FC! 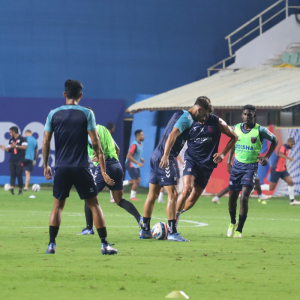 Odisha FC succumbed a defeat in their previous game as the team from Bhubaneswar was beaten by neighbouring Jamshedpur FC by a big margin of 4-0 goals. Chennaiyin FC, on the other hand, was defeated by Mumbai City FC 1-0 in its last game on Wednesday.

Both the teams will have the same target and that is to get back on the track of winning. Having played five games each, both Odisha FC and Chennaiyin FC are almost in a similar situation on the points table. Odisha FC, with three wins and two defeats, has nine points while the Chennai-based side has eight points with two wins, two draws, and one loss.

“The good thing in football is that we play again next week and we are going to prepare. We will take whatever good things we did today and try to be ready for the match and compete well. I apologize to all Odisha FC fans on behalf of the team and everyone today,” Odisha FC Head Coach Kiko Ramirez had mentioned after the previous game against Jamshedpur FC.

After their defeat against Mumbai City FC, Chennaiyin FC head coach Bozidar Bandovic had expressed, “Emotionally it’s bad because I believe we deserved more but we need to keep working, keep thinking about the next game. We need to be ready and we will be ready for the next game.