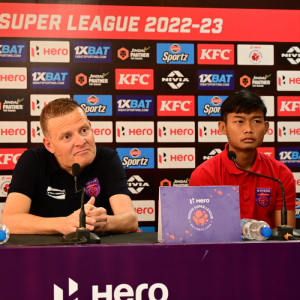 Josep Gombau and Jerry Mawihmingthanga attended the pre-match press conference and briefed the media ahead of their game tomorrow against ATK Mohun Bagan.

Odisha FC lost the previous match to FC Goa, how is the morale of the team and how have they prepared themselves for this match?

Josep Gombau: There was a win or lose in the game but the game against FC Goa was very good. Because of Nandakumar’s red card we had to play with 10 men which was a bit tough but this match against ATK Mohun Bagan is different and they are a very good team, the game will be challenging for us.

Odisha FC’s record so far is very good, similar to ATK Mohun Bagan. What are you thinking about playing against a good opponent?

Josep Gombau: All the teams are playing very well in the ISL. We will try to make up for what we missed in the previous match at FC Goa and have the willpower to win.

Jerry, there is no doubt that you are a very good player, this season has also seen a lot of strong performances, what can you say about that?

Jerry Mawihmingthanga: I would like to give all the credit to our head coach (Josep Gombau), without him and the team this would never have been possible. Our team has a lot of motivation that drives us forward!