Press Release 2021-10-21 Indian Super League Comments Off on Odisha FC Youth Graduates make it to the final ISL squad ahead of the new season! 179 Views 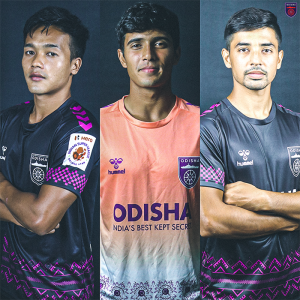 20-year-old Delhi forward Akshunna had put up an impressive show in the 2019-20 season of the Hero Elite League (U-18) by scoring 20 goals for Odisha FC. On the other hand, Delhi defender Deven and Mizoram winger Chhangte Jr were trained at the Aspire Academy in Doha as a part of the Club’s partnership with the academy then. Lalhrezuala Sailung, another Odisha FC youth team product, had also made his professional debut last season and had scored his maiden goal as well.

Speaking about the players, Odisha FC’s U-18 Head Coach Sandeep Alhan commented, “I would like to congratulate Deven, Chhangte, and Akshunna for getting selected in the senior team. As a coach, I am very happy and this is a very satisfying moment for me as our three young boys are going to play at the senior (ISL) level. They have done well in the past few years with their commitment, sincerity, and determination and they deserve this opportunity. I wish them good luck for the season.”