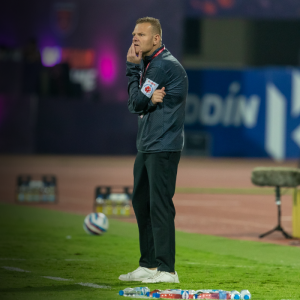 Odisha FC announced the signing of Aniket Jadhav from East Bengal FC for an undisclosed fee which will see him stay at the club till summer 2024.

Aniket was born in Kolhapur, Maharashtra. Jadhav was part of the AIFF Elite Academy batch preparing for the 2017 FIFA U-17 World Cup to be hosted in India.

After the tournament, he was selected to play for the Indian Arrows. He made his professional debut for the side in their first-season match against Chennai City. He started and scored a brace as the Arrows won 3–0.

Jadhav was invited to join Blackburn Rovers for a 3-month training spell at their academy in 2019.

Aniket looked like an improved player with more consistency and stability in the 2021-22 ISL season. He scored twice and provided an assist thrice while making 20 appearances for Hyderabad FC, helping them lift the coveted ISL title trophy.

On joining The Eastern Dragons this is what Josep Gombau had to say, “First, I would like to welcome Aniket to the club. He is a talented player who will contribute to the squad. We needed depth in this particular position and the club did its due diligence to select the best player for the role.”

“Aniket brings a different skill set to the pitch and we will try to maximize his role in the team. He won the title last season with Hyderabad FC and is a proven winner which I think will be helpful given his experience in the league. I wish him the best for the remainder of the season and hope he enjoys his time at the club.”

Odisha FC will travel to Kolkata to take on ATK Mohun Bagan at the Salt Lake stadium on January 28.

Previous India go down 0-3 to Uzbekistan in second U-17 friendly!
Next Jamshedpur FC’s Eli Sabia – Leading from the back!