Jamshedpur FC’s Eli Sabia – Leading from the back! 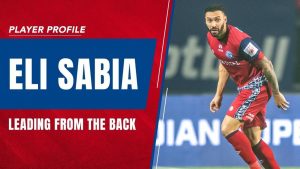 Eli Sabia has taken up the mantle as commander-in-chief of the Jamshedpur FC team on the pitch since the departure of former captain Peter Hartley, and his leadership skills are telling.

The Jamshedpur FC squad has certainly improved in various aspects of their performances even though the final product is still lacking in some areas, and Sabia’s impact has been one of the major reasons for the uplift around the team.

Returning from injury to boost the squad, Eli has steadied the ship at centre back even though players around him have been chopped and changed.

Starting his career at Paulista in Brazil, Sabia played at multiple clubs including a stint at PSG star Neymar Jr’s former club Santos before making a move to the Indian Super League in 2016 with Chennaiyin FC.

After a couple of seasons away, Sabia returned to Chennaiyin FC and played a major role in the Marina Machans’ push to the ISL final in 2019. A move to Jamshedpur FC ahead of the 2021-22 season followed, and the rest is history.

Eli was one of former Jamshedpur FC head coach Owen Coyle’s most trusted lieutenants, and alongside Hartley, formed a solid partnership at the back, leading the Men of Steel to their first ever League Shield trophy last time out.

A tattoo of the trophy now rests on one of Sabia’s calves, and in many ways highlights his love for all things India.

A no-nonsense type defender on the pitch, he’s a jovial and lovable character off it, which is perhaps why he was trusted enough to take up the captaincy after Hartley.

The 34-year-old has the experience behind him to succeed at the highest level, and with just a few games to go, his leadership and calmness will be key in deciding whether Jamshedpur FC can end the season on a high or not.