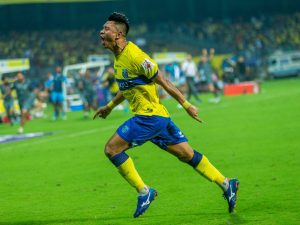 Indian Super League side Kerala Blasters will have to do without their defender Sandeep Singh for the remainder of the 2022/23 season.

Today, Kerala Blasters confirmed that Sandeep Singh suffered a fracture in his ankle against FC Goa at the Jawaharlal Nehru Stadium in Margao on Sunday, January 22 and will be undergoing necessary surgery for the same.

During the match, Sandeep Singh and FC Goa’s Saviour Gama had collided in the air with their heads and initially Sandeep was treated for a possible head injury but the landing after the collision was ackward and a ligament injury was suspected but further tests revealed the fracture in his ankle.

He will be out for a while and it will be interesting to see if the Kerala Blasters sign a replacement in the ongoing winter transfer window for the remainder of the season.