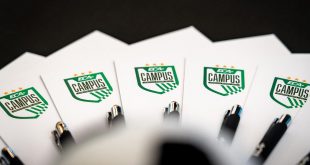 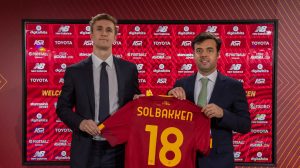 AS Roma are delighted to announce that an agreement has been reached with forward Ola Solbakken that will see him officially join the club in January 2023.

Solbakken, 24, has agreed terms on a contract with the Giallorossi that will run until June 30, 2027.

The Norway international will officially join up with his new teammates on January 2, 2023.

“I have been pushing for this, I really wanted to be a Roma player – and finally I can say that I am,” Solbakken said.

“(AS) Roma stood out to me from the start – I really believe in the prospects and the plans for the club and I wanted to be a part of that.”

“I am coming here to learn and improve but I also want to show what I am capable of. The Roma fans are the best I have come across and I cannot wait to be playing on their side.”

Solbakken will join the club following the conclusion of his contract with Norwegian side Bodo/Glimt, with whom he won the Norwegian title on two occasions.

Over the course of three years at Bodo he made 91 appearances for the club in all competitions, scoring 20 goals and providing a further 24 assists.

Solbakken has previously played for Rosenborg Trondheim, where he started his career, and Randheim.

“Ola Solbakken has firmly established himself in a league where the level of competition has improved rapidly in recent years,” said Tiago Pinto, the club’s General Manager (Football).

“His age, his characteristics and the room he still has to improve all align with what we want for our project: Ola has great technical ability and is blessed with physical attributes that make him a modern footballer.”

“A number of different clubs were interested in him and in the end he has chosen to join Roma; we can only be very pleased about that.”

Solbakken will wear the No. 18 shirt for the Giallorossi.