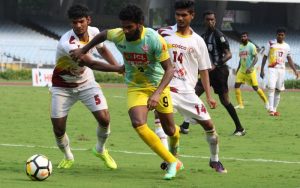 The All India Football Federation has communicated to the participating State Associations that in wake of the rise in COVID-19 positive cases, and after consultation with the Government of Kerala, the competition schedule for the 75th edition of the National Football Championship for the Santosh Trophy has been deferred indefinitely.

Originally the Santosh Trophy final round was supposed to be played from February 20 to March 6 in at the Payyanad Sports Complex in Manjeri and Kottappaddi Stadium in Malappuram.

A review of the circumstances will be undertaken in the third week of February to decide on new dates and the new schedule of this seasons Santosh Trophy.