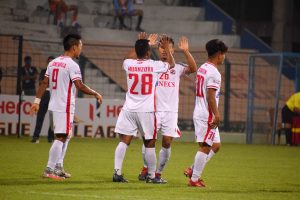 Despite losing out on the race of the top half of the table, Aizawl FC picked up vital three points in the race to stay safe from relegation as Yan Law’s side defeated Chennai City FC 3-0 at the Kalyani Municipal Stadium on Sunday, February 28. Goals by Lalmuanzova, Malsawmtluanga, and Lalremsanga led the Mizoram-based club to an easy win over their opponents, after Chennai City’s Vladimir Molerovic missed a penalty in the second half.

With both Mohammedan Sporting and TRAU FC winning earlier in the day, Aizawl FC were left reeling as their hunt for the top half of the table concluded. Nevertheless, their clash against Chennai City FC had all to play for as vital points were at the stake, that could save either team from relegation.

Out to prove a point, Aizawl FC were gifted an early goal in the 6th minute when Lijo Francis failed to make a simple clearance, allowing Lalmuanzova to pounce on the loose ball and smash home to hand Yan Law’s team a solitary goal lead. The first few minutes of the match decided its fate, and Chennai City FC were left reeling, down to ten-men in the 12th minute when goalkeeper Kabir Toufik was given his marching order for an off-the-ball altercation with Lalliansanga.

Down to ten men, Chennai City FC were second best to Aizawl FC for much of the first half. Meanwhile, Aizawl FC played their usual style of dominant attacking-based possession football. However, in the 28th minute, much against the run of play, Chennai City could have found their equaliser. Charles Anandaraj sent a delicious cross for Jockson Dhas in the box but the latter’s first-time effort was saved by the opposition goalkeeper.

If the first goal was a gift for Aizawl FC, the second was truly worth making the highlights reel. Malsawmtluanga stood tall over a free-kick right outside the box and sent a curling shot that rattled the woodwork and crashed into the net as Aizawl FC doubled their lead.

Unable to make the most of their opportunities up front and left reeling with ten men, Chennai City FC could only commit bodies in defence to stop the Aizawl FC juggernaut. The half-time scoreline read 2-0 in the Mizoram-based club’s favour.

In the 51st minute, Aizawl FC safe-guarded their win as Lalremsanga found the back of the net from a corner kick that caused chaos in the penalty box before Sanga bundled the ball home. Leading by a three-goal advantage, Aizawl FC tried to add more gloss to the scoreline. Two minutes later, Aizawl FC’s celebrations were almost cut short when Demir Avdic was brought down inside the box. But, Vladimir Molerovic failed to convert the spot-kick, drawing a good save by the opposition goalkeeper.

Aizawl FC missed a couple of chances in front of the goal as their attacking intent was shown throughout the match. Chennai City FC seemed like they conceded the match to superior opponents and failed to show zeal in the final third. The full-time scoreline read 3-0 as Aizawl FC trotted on to a comfortable win.

Meanwhile, with Indian Arrows and Sudeva Delhi FC having immunity, the teams that will fight to stay in the I-League next season, excluding those two are – Aizawl FC, Chennai City FC, and NEROCA.