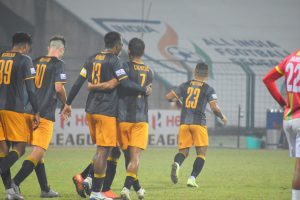 Fourth-placed RoundGlass Punjab FC will try to close the gap on the top when they take on NEROCA FC, a side looking to push itself out from the relegation zone, at the Kalyani Municipal Stadium tomorrow, March 1.

Speaking at the virtual press conference, NEROCA head coach Gift Raikhan said, “Each of the remaining games is very important for us. I am very happy to see major development in the players. We are a young and inexperienced side. There are a lot of positives in the last two games against Real Kashmir and Churchill Brothers – we tried our level best, but the results were not in our favour.”

“There were small mistakes here and there, but it is part and parcel of the game. We are working hard trying not to repeat them, and today as well we will make the final preparations for the game against RoundGlass Punjab.”

“Everybody knows RoundGlass Punjab are a contender for the title. They have young Indian players, and good foreigners, who already have played in India, and have experience of playing in the I-League. It will be a tough match, but I assure you we will give our best in the game.”

Goalkeeper Bishorjit Singh said, “Last game was a crucial game for us, we came close to scoring in the dying seconds, but unfortunately, we lost the game. Now, our focus is on the next game, against another quality opposition who are fighting for the championship.”

RoundGlass Punjab were held to a 1-1 draw against Real Kashmir in their last match and fell down to fourth place with 15 points from nine matches. With Churchill Brothers clashing against Gokulam Kerala, both of whom sit above them, Curtis Fleming’s side has a good opportunity to cut the gap between them with a victory over a struggling NEROCA FC.

Speaking at the virtual pre-match press meet, coach Curtis Fleming said, “It was hard during this long break for us, but the operation staff looked after us, especially the different food that we have had. I don’t see this period as rest, but more like recovery. We trained every day during this break to keep ourselves sharp, focused on the next game and the players are raring to get back on the field.”

“Like every game in the I-League, playing NEROCA is going to be very tough. They have got many attacking players, a really good philosophy. I think they will always be asking us questions. Every game they have been involved in, it has been 50-50. It comes down to that little bit of focus and quality. We take every game on its own merits, it will be a hard game, but are looking forward to it.”

Addressing concerns over his strike partner – Chencho Glysten’s absence for the next game, Papa Diawara said, “Chencho is a vital player. But football is a team game. Injuries, suspensions are a part of the game. Luckily we have a deep squad, and tomorrow somebody else will get an opportunity to play. Regardless of who starts, we need to focus only on winning the game.”