Pakistan Coach Rizki: It will be challenging to play against top team like India!

Press Release 2022-09-06 Asia, Team India, Women Comments Off on Pakistan Coach Rizki: It will be challenging to play against top team like India! 359 Views 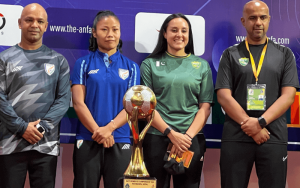 Head Coach Adeel Rizki who has taken over the reins of the Pakistan Senior Women’s Football Team after their long absence from international football for almost eight years, has set his focus to play good football against defending, and five-time champions India.

“The Indian team are the defending champions and it’s always a challenge to play against a top team. We are here to play football, the game we love,” Rizki mentioned.

“We feel our preparations have been good, and we are looking forward to making an impact”, he added.

Pakistan played last in the SAFF Women’s Championship in 2014 where they hosted the tournament, but lost in the group stage.

“The players are very excited to step onto the field. Our squad comprises both local, and overseas talent. We hope to play well and represent our country to the best of our abilities,” coach averred.

akistan will face India in their opening encounter on September 7, 2022 at IST 12.45 pm. The match will be streamed live on Eleven Sports platform.

Captain Maria Khan, a goalkeeper turned midfielder, grew up in the United States where she played football for the University of Denver, and is aware of her opponents.

“We are keenly looking forward to playing India in our first match. We aim to be aggressive, and stay positive. We know that the expectations are high on both sides of the border. That is what is driving us. Such expectations help the sport grow in the region,” Maria informed.

Hajra Khan who played against India in SAFF in the earlier editions is also a key player.

“The goal is to make this count. I’m excited to start. It will be a high-intensity match, with immense sportsmanship that goes beyond the game.”