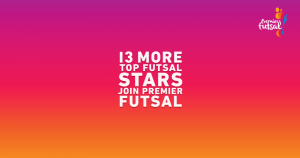 Premier Futsal has signed thirteen more top futsal stars from across the world to take part in its inaugural season, adding to the battery of decorated futsallers already signed up to play in the sport’s first-ever multi-national league.

All players have committed to competing in Premier Futsal for five years and will be assigned a team in the upcoming player draft scheduled for later this month.

The technical aspects of the league will be designed and overlooked by Doug Reed, who joins as Tournament Technical Commissioner. Reed, a full England Futsal International, has extensive experience in Futsal administration from around the world.

The latest announcements marks another significant milestone for the fledgling Premier Futsal ahead of its inaugural season which kicks off July 15, 2016.

The league has signed some of the best futsallers in the world – spearheaded by the renowned Alessandro Rosa Vieira, fondly known as ‘Falcao’ – and has even enticed iconic footballers like Paul Scholes and Michel Salgado to compete.

Premier Futsal Co-founder & Finance Director, Nithyashree Subban said, “The signing of another bunch of world-class futsallers brings us a step closer to completing our player roster. We are delighted with the calibre of players we have managed to sign and can’t wait for our inaugural season to get underway. With the line-up of futsal and football big-guns that we have managed to bring together, I am sure we will be successful in delivering a scintillating spectacle on court and spurring the development of the sport in India.”

Premier Futsal, promoted by Xavier Britto of Indev Group, is the world’s first-ever multi-national Futsal league and promises to bring the legends of football and futsal together for the first time. Led by the ‘Pele of Futsal’ Alessandro Rosa Vieira fondly known as Falcão, the league will feature over 50 International Futsallers from four continents and 21 countries. Each franchise will be assigned a marquee international football player, seven international and five Indian Futsallers through a player draft scheduled later this month.

The league will kick-off July 15, 2016, and will be telecast live and exclusive on Sony SIX, SONY ESPN and Sony AATH and as a livestream on Sony LIV.