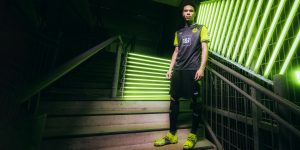 Sports company PUMA has launched an exclusive special edition retro Borussia Dortmund jersey in black and neon yellow in honour of their success in the 1990’s, during which time BVB captured the UEFA Champions League and two German Bundesliga championships.

Every era has its own history and with each era we associate our own heroes and stories, special moments and in this case, a colour. When you think of BVB in the 90’s, you automatically picture heroes of that time in their neon-colored jerseys. For the first time in almost 30 years, Borussia Dortmund was back on the pitch in a unique neon yellow jersey for yesterday’s clash with old rivals Werder Bremen.

Following many historic duels during this time Werder Bremen are the perfect opponents. Bremen were BVB’s strongest competition during the 90’s including a historic battle for the 1995 Championship title, the first black and yellow championship in decades.

The jersey celebrates the heroes of one of BVB’s most successful eras by integrating images of BVB legends Michael Zorc, Karl-Heinz Riedle, Lars Ricken, Matthias Sammer, Julio Cesar, Knut Reinhardt, Stephane Chapuisat, Stefan Klos, Jörg Heinrich, Paul Lambert, Flemming Povlsen, Paulo Sousa, Heiko Herrlich and Günter Kutowsk into the fabric with a special message, “Every era begins with the will of its heroes.”