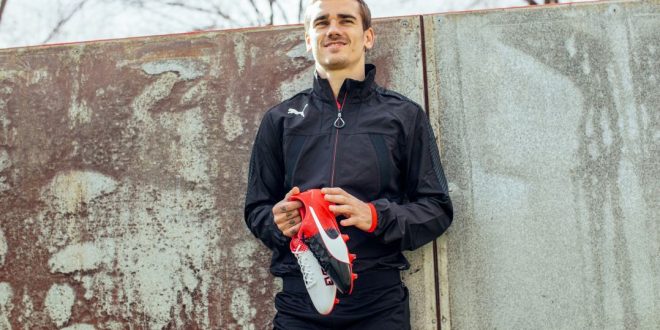 PUMA has launched the new superlight evoSPEED SL-S II boot, the latest update in the evoSPEED SL family. The dual coloured boot will be worn on pitch by PUMA’s fastest players, Sergio Agüero, Antoine Griezmann and Marco Reus amongst many others as the new season kicks off.

The evoSPEED SL-S II features a dual colour design, working with a new colour palette of red blast, black and white. Both heels are block coloured in striking PUMA Red Blast with a geometric pattern fading into a black vamp on the left shoe and a contrasting white on the right.

Additional performance features of the SL-S II can be found in the outsole. The SPEEDTRACK spine provides the perfect balance between stability in the midfoot and flexibility in the forefoot, enhancing both speed and agility. The lightweight nylon outsole stud configuration is composed of a mix of bladed and conical studs, providing increased levels of stability, traction and acceleration.

Speaking about the new boot, Sergio Agüero said; “The evoSPEED SL-S II is a great boot to both train and play games in. The updated SPEEDFRAME cage and soft material provide me with the support and comfort I need, but it is still super light which is extremely important for me. PUMA’s two coloured boots are iconic and the colours and graphics on this boot are really cool – I’m definitely looking forward to starting the new season in them.”