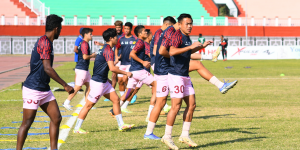 Rajasthan United FC will take on Mohammedan Sporting in their first I-League 2022-23 fixture of the new year at the Ambedkar Stadium in New Delhi on Friday, January 6 with the kick-off slated for 4:30pm IST.

After suffering back-to-back losses to Gokulam Kerala and TRAU, Rajasthan United won their home game 1-0 against Aizawl just before the break. The Desert Warriors, unbeaten at home, will look to maintain that record in their next game against Mohammedan Sporting, who will play under the new leadership of head coach Kibu Vicuna. The Spaniard has previously managed the likes of Mohun Bagan and Kerala Blasters, and is now tasked with lifting Mohammedan from ninth on the table. The Black and White Brigade will expect Vicuna to replicate his management prowess and display a better second half of the season starting with the game in the capital.

The two have faced each other twice with Mohammedan sweeping the scoreboard in their favour on both occasions. Last season, a brace from Brandon Vanlalremdika helped the Black and White Brigade to a 2-0 win in the championship stage.

Addressing the media at the pre-match press conference, Rajasthan United head coach Pushpender Kundu shared his eagerness to resume the season. “Our team is in a good shape and the boys are ready. They will deliver a good show tomorrow.”

Kundu further shared his thoughts on the change of management at Mohammedan. “In any team, a new coach means a new philosophy and fresh energy in the team. They will be in a new shape and new formation. Like us, they are also looking to go up on the table, but we are ready for them.”

Rajasthan United midfield general Joseba Beitia was recently announced as the club captain for the rest of the season. “I am very happy to be leading the team. A big thanks to the coach and my teammates who wanted me as their captain. For me, it’s a new responsibility but I am ready for that,” the Spaniard said.

Mohammedan Sporting head coach Kibu Vicuna said, “We have been preparing for the past two weeks. We’ve had good training sessions and also played a friendly match against ISL side East Bengal. We are ready for tomorrow’s game.”

Vicuna further talked about their opponents and went on to praise their new captain Beitia, who was part of Mohun Bagan’s I-League winning squad under him. “I have seen a few games of Rajasthan United. They have many good players, especially Joseba Beitia, who is one of the most creative players in the league. Rajasthan are a tough team to beat, but we have prepared accordingly and we are ready.”

Mizo centre-back Sairuat Kima, who has made two appearances for Mohammedan this season, said, “It will be a tough one, especially playing away. Our new coach has come in and we are preparing really hard, so we will do our best tomorrow.”

The match between Rajasthan United FC and Mohammedan Sporting will be broadcast live on Eurosport and Doordarshan Sports and streamed live on the Discovery Plus OTT platform.