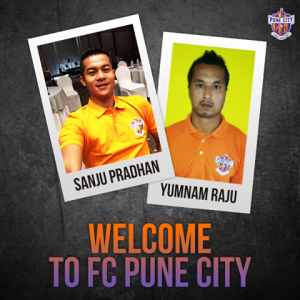 FC Pune City CEO Gaurav Modwel said, “Pradhan has shone at every stage of his career and has the versatility and pace to match the best in the country; he will be a good addition to our attacking third. Whereas Raju is a solid and dependable defender. His focus and dedication is exemplary and he has a modest approach of a player who wants to give his best to the team.”

The 26-year old Raju made his professional debut with Churchill Brothers SC in 2011. In his stint with the Goan outfit, the Manipur born player has an I-League title and a Federation Cup triumph under his belt. He also scored a goal in AFC Cup match against Singapore side Home United FC.

Sanju on the other hand has won two Federation Cups representing East Bengal Club, an ISL title with Atletico de Kolkata in 2014 and also was a part of the 2012 Nehru Cup winning Indian team. From East Bengal he shifted base to Dempo SC and subsequently to Salgaocar FC. The midfield dynamo played for NorthEast United FC in ISL-2 after a title-winning stint with Atletico De Kolkata in 2014.

Head coach Antonio Habas felt the team’s shaping up well with the signings made so far. “Raju adds teeth to the defence line. He’s strong, he’s excellent in the tackle and he’s very good technically. Pradhan on the other hand is a very talented player. He’s calm, focused and dedicated. He’s well-accepted and loved by his partners.”

Both Raju and Pradhan were looking forward to joining FC Pune City. “It’s going to be a new beginning for me and am pretty excited to work with coach Habas and new teammates,” said Raju.

Pradhan who will play under Habas at ATK said, “I was a part of title-winning team with coach Habas in the first season and will join some of my former colleagues here at FC Pune City. It’s a challenge that I am most looking forward to.”