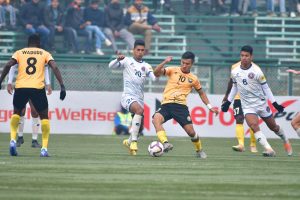 Real Kashmir FC registered their second consecutive win in the I-League 2022-23 as they defeated Rajasthan United FC 2-0 at the TRC Turf Ground on Saturday, November 19.

A thumping first-half header by Moro Lamine and a clinical finish in the second half by Jerry Pulamte meant the Snow Leopards took their tally of points to six from two outings.

The first half kicked off with Rajasthan United taking control of the game with their quick passing and better ball possession. The home side on the other hand relied more on counter attacks. However, in the 13th minute, the first chance of the game went to the home side when Wadudu Yakubu took a right footer after creating the necessary space for himself. His shot, however, went wide. A minute later, Nuhu Seidu saw his header saved by Rajasthan United custodian Rafique Ali Sardar.

Midway through the first half, the Tajik winger Nozim Babadzhanov, who impressed with his series of good through passes, whipped in a perfect corner kick on the near post and it was finished by defender Moro Lamine, who jumped high to put the ball in. Five minutes later, the away side was handed a perfect opportunity as they received a free-kick just outside the box. Spanish recruit Joseba Beitia took the free-kick from his right foot but his effort went just over the crosspiece.

At the half-hour mark, Rajasthan United’s striker Nuha Marong entered the opponents’ penalty area after beating Jestin George on pace. The Gambian then fired a powerful grounder, but it went straight at the experienced goalkeeper Subhasish Roy Chowdhury.

After the interval, the game restarted in a similar fashion with Rajasthan United controlling the possession and Real Kashmir displaying a strong performance in the midfield. Yakubu proved a key player for the home side with his commanding performance. In the 55th minute, Babadzhanov provided a fine through ball for Lalnuntluanga Bawitlung, who failed to make the most of it.

In the 67th minute, Marong found himself in space inside the Real Kashmir box but his effort was easily saved by Roy Chowdhury. Eight minutes later Marong won the ball in the midfield and passed it for Chaves, whose curling shot after outpacing his marker was too wide to cause any trouble for the goalkeeper.

At the beginning of the final quarter, Real Kashmir’s Samuel Kynshi put in a defence-splitting through to find Jerry Pulamte, who finished calmly to score the second goal for the home side. In the 84th minute, Kynshi almost made it 3-0 as his curling free-kick hit the post, after Ali Sardar barely managed to tip it away.