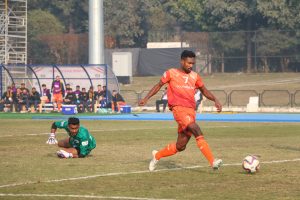 The final score looks comfortable for Staikos Vergetis’s boys, but that comfort came only in the 77th minute through winger Krishnananda Singh, a second-half replacement. The relief on the faces of RoundGlass Punjab footballers after the final whistle was proof that their coach did not overestimate NEROCA when he said on Saturday that they are too good a side to be languishing in the second-last spot on the I-League points table. However, that did not change despite Jourdain Fletcher and Co.’s spirited display after the breather. Most of the damage was done in the first half itself.

Experienced coach Wangkhem Khogen Singh’s defenders have let him down this season more often than not and it was no different here on Sunday. As early as the 12th minute, Pranjal Bhumij’s floating delivery found an unmarked Luka Majcen in the middle of NEROCA’s penalty box and he headed it in. The defenders were far off, thinking they had caught the Slovenian goal machine offside.

Hardly three minutes passed before Majcen split the NEROCA defence with a through pass as Hero of the Match Brandon Vanlalremdika’s right foot made it 2-0.

At that point, it seemed the match would be frustratingly one-sided. Visiting goalkeeper Shubham Dhas had to keep out Pranjal’s strong left-footer just two minutes later, and Luka almost scored unmarked again in the 24th minute. NEROCA were finding it hard to keep the ball, let alone attacking. The tide turned after the half-hour mark. Yumnam Gopi Singh got a nice lob from the right flank into the penalty box and RoundGlass Punjab goalkeeper Kiran Limbu had a horrendous misunderstanding with his own defender. He fisted the ball out but the rebound almost rolled over into the goal. Had Gopi not fallen down, he could have scored. Limbu also had to make a goal-line save from a long-ranger at the stroke of half-time.

Gopi eventually made it 2-1 in the 44th minute with a powerful right-footer. Young midfielder Tangva Ragui had a good match coming off the bench in the 27th minute. He was lucky to get the ball just outside the hosts’ box on the rebound as it hit his own teammate and debutant Michael Kporvi on the back. Ragui laid it to Gopi, who unleashed a scorcher. It could well have been 2-2 going into the break had NEROCA captain Fletcher been able to put some more power into his header from a free-kick in stoppage time. The lack of it enabled Limbu to palm it out diving to his right.

NEROCA were the stronger side at the start of the second half, too. RoundGlass Punjab came back into the game after the introduction of Maheson Singh in the 53rd minute. Majcen started to find space through the middle again and in the 60th minute, he headed in a second time when one of his teammates’ shots came off the crossbar. But it was ruled offside.

Two minutes later, Vergetis decided to withdraw Spanish midfielder Juan Mera and introduce Krishnananda Singh. Seven minutes later, he was forced to withdraw Majcen because of a muscle pull. That gave NEROCA less worries in defence, hence more opportunity to push forward but they could not find the net. On the contrary, RoundGlass Punjab took advantage of the empty spaces at NEROCA’s back. Krishnananda got a beautiful ball in attacking third, outfoxed two defenders, went round the keeper and put the ball in to settle the issue.