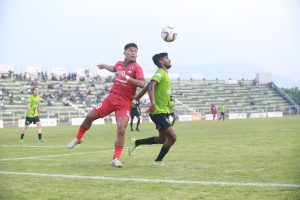 Gokulam Kerala FC made a perfect start to their year defeating Churchill Brothers 1-0 in their I-League 2022-23 match at the Payyanad Stadium in Manjeri, Kerala on Sunday, January 8.

In a game where Churchill Brothers had an attacking edge over Gokulam Kerala FC, it was the defensive line led by the captain Aminou Bouba that helped the hosts keep their hattrick hopes alive as the debutant Sergio Mendigutxia scored the decisive second half goal.

Both teams went close in the initial minutes of the game with Churchill Brothers’ Spanish magician Tana going close in the fourth minute following a cross from Lamgoulen Hangshing. However, the Spaniard skied his shot. Two minutes later, Gokulam Kerala FC’s Noufal crossed it in to Sergio Mendigutxia, who headed it wide.

As the game progressed, the goalkeepers at both ends saw almost no activity. Gokulam Kerala FC number one Bilal Khan was called into action just once. Early in the game, a miscued cross from Lalawmpuia Sailo almost looped into the goal, but Bilal safely palmed the ball over the cross-bar.

Noufal, a live wire in the attack for the hosts, made many threatening runs through the right, beating his markers with his pacey dribbles. However, he was wasteful in the final third.

After enjoying an attacking edge for majority of the first half, the visitors lost the control of proceedings and almost conceded on the brink of half time when their custodian Albino Gomes made a crucial reflex save to deny a headed effort from Mendi, following a corner.

Five minutes into the second period, Gomes was again called into action. On this occasion, the goalkeeper pulled a rather easy save, collecting the ball comfortably after a shot from outside the box by Gokulam Kerala FC’s Rahul Raju.

As the scores remained deadlocked, both the club’s coaches looked to the bench for fresh legs. Within just minutes after coming on to the pitch, the Churchill Brothers substitute Chaitan Komarpant almost scored the first goal. He belted a powerful shot from 30 yards out, but his strike was met by an outstretched Bilal Khan, who saved the shot at the expense of a corner.

Ten minutes later, Mendigutxia broke the deadlock. In a quick break, Gokulam Kerala FC’s Farshad Noor fed the ball to the Spanish striker, who linked up with Sreekuttan VS, before entering the box and rolling the ball past the goalkeeper.

The Gokulam Kerala FC defence, thereafter, stood strong to see out the game in the final minutes. Sharif Mukhammad had an opportunity to equalise for the visitors from a free kick in added time, but the Afghan put too much power in his free-kick, which sailed over, as the visitors left the Payyanad Stadium empty handed.

Following the result, Gokulam Kerala FC climb to third on the table, above Real Kashmir FC and are four points behind leaders Sreenidi Deccan FC.