I-League side RoundGlass Punjab FC have announced the signing of defender Tarif Akhand from Rajasthan United FC for the 2022/23 season.

Tarif Akhand then played for Kenkre FC in the I-League qualifiers before joining Rajasthan United FC for the 2021/22 I-League. Now he moves on to play for RoundGlass Punjab FC. 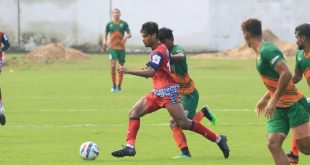