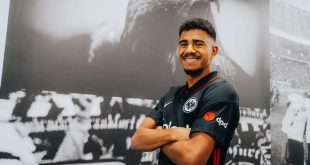 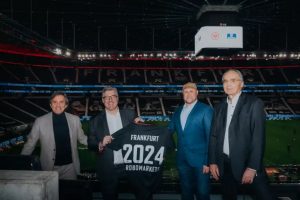 Eintracht Frankfurt start the new year by welcoming another international company from the financial sector into their family of partners in multi-award-winning, multi-asset broker RoboMarkets.

The partnership, which will initially run until the end of the 2023/24 season, includes widespread visibility of the company logo inside the stadium, TV advertising on the Deutsche Bank Park advertising boards as well as joint communication via relevant digital channels.

In addition to those common features, the planned partnership with EintrachtTech – Eintracht’s digital subsidiary – will provide new starting points for occupying joint fields of technology and implementing ideas involving the self-developed mainaqila app.

RoboMarkets, whose headquarters are based in the Cypriot city of Limassol and who also have offices in Sweden and the Czech Republic, made a conscious decision in 2018 to be represented in the financial hub of Frankfurt as RoboMarkets Deutschland GmbH, a BaFin-licensed financial services institution. The partnership therefore strengthens Eintracht’s long-standing, established and profound connection to the region as well as the European and financial capital of Frankfurt itself.

“With RoboMarkets, we’ve managed to bring on board a Premium Partner which not only thinks about the future, but lives it too,” said Eintracht board spokesman Axel Hellmann. “With Frankfurt being one of the world’s most important financial centres, there are brand new visions opening up here for all parties, which everyone can be happy about.”

Maximilian Felske and Gottfried Korzuch, General Managers of RoboMarkets Deutschland GmbH, added, “In Eintracht Frankfurt, we’ll have a strategic partner on our side in the coming years who will support us significantly in expanding the awareness levels of RoboMarkets in existing as well as new territories. In line with our understanding, our partnership is shaping our ambitious future vision of challenging at the very top of our respective leagues in Germany and Europe on a consistent basis.”