Rosters unveiled for the inaugural MLS NEXT All-Star Game!

Press Release 2022-07-29 Americas Comments Off on Rosters unveiled for the inaugural MLS NEXT All-Star Game! 239 Views 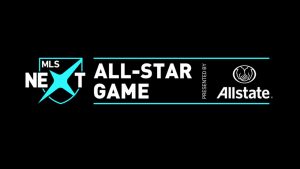 MLS NEXT have announced the 45 players selected to the inaugural MLS NEXT All-Star Game presented by Allstate. The game will provide a world-class experience for the best young players in North America to showcase their talent on a national stage.

Two teams will compete in an East vs. West format at the National Sports Center in Blaine, Minn. on the day of the MLS All-Star Game, Wednesday, August 10. Twenty-eight of the 29 MLS academies had at least one player selected to the inaugural rosters, with Inter Miami CF, Philadelphia Union, and San Jose Earthquakes leading the way with three selections apiece. Five non-MLS academies will also be represented in Blaine: Barca Residency Academy, De Anza Force, PDA, Strikers, and the San Francisco Glens.

Additionally, three 2021-22 MLS NEXT Most Valuable Players presented by adidas are also represented on the roster: Roka Tsunehara of De Anza Force (U-16), Bryan Moyado of LAFC (U-17), and Colin Griffith of PDA (U-19).

The MLS NEXT Player Selection Committee also advised on the selection of the coaching staff for both East and West clubs. The head coach of the East team will be MLS Great Javier Morales, who appeared in 255 MLS matches across his 11-year playing career and is currently an Inter Miami academy coach. Morales will be joined on the bench by Rob Becerra of the New England Revolution, who coached the U19 Revolution team to a championship at the 2021-22 MLS NEXT Cup Playoffs in July.

Leading the West squad will be MLS Great Jeremy Hall, who played 127 games for five MLS teams during his playing career and is currently an assistant coach for MNUFC2 of MLS NEXT Pro. Joining Hall is assistant coach Antonio Medina, who coached the U19 San Francisco Glens to a runner-up finish at the 2021-22 MLS NEXT Cup Playoffs.

MLS NEXT and Allstate will provide the players with a once-in-a-lifetime player experience during MLS All-Star Week, with a full slate of evening programming events and activities in advance of gameday. The players will be fully integrated into MLS All-Star Week festivities while training and competing in their own All-Star Game.

The match will be streamed live and further tune-in details will be available at a later date. Admission to the MLS NEXT All-Star Game presented by Allstate at the National Sports Center is free of cost.