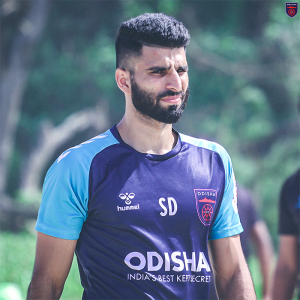 Defender Mohammad Sajid Dhot has made a permanent move from Odisha FC to Indian Super League rivals Chennaiyin FC in the January transfer window. He will be joining the Chennai-based side with immediate effect.

The 24-year-old Punjab-born Mohammad Sajid Dhot took his first steps at the St. Stephen Football Academy in Chandigarh, spend times at the IMG Academy and the AIFF Elite Academy before moving to DSK Shivajians FC. He joined Delhi Dynamos in 2018 and then shifted with the club to Odisha FC in 2019.

Sajid Dhot has played 23 matches in the Indian Super League so far representing Odisha FC and Delhi Dynamos across four seasons, but the club has had higher expectations from the former India junior international.

Now Sajid Dhot will hope for a new chance at Chennaiyin FC.

Confirming the signing of the defender Mohammad Sajid, who has been training with the club this season. 💪🏻#AllInForChennaiyin #அதிரடிஆட்டம் pic.twitter.com/uGqtCnQC7R