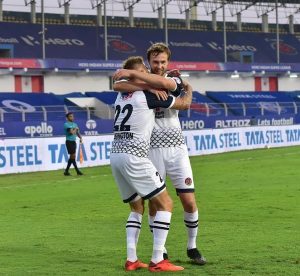 Goals from Matti Steinmann and Anthony Pilkington powered SC East Bengal to a 2-1 win over hosts Jamshedpur FC in their second-leg ISL face-off at the Fatorda Stadium on Sunday evening. Captain Peter Hartley reduced the deficit for Jamshedpur FC late in the game.

Playing their sixteenth match this season, SC East Bengal got off to a dream start with Matti Steinmann breaking the deadlock in the sixth minute. The German midfielder rose highest at the near post to meet an inch-perfect Narayan Das corner and nod it home with a glancing header to register his fourth goal this season.

The visitors looked much more organised at the back compared to the previous game and succeeded in keeping Jamshedpur FC’s frontline at bay. The hosts failed to register a single shot on target in the first-half.

SC East Bengal came close to doubling their lead twice in the opening half through Pilkington and Steinmann. In the 31st minute, Pilkington’s powerful free-kick from near the edge of the Jamshedpur FC box went just over the crossbar, whereas Steinmann failed to bury a free header off a long throw-in from Gaikwad in the first-half stoppage time.

SC East Bengal began the second-half from where they had finished the first, creating a few more chances by capitalising on counter-attacks.

In the 59th minute, Narayan Das stormed towards the Jamshedpur FC box, unmarked on the left, and fired a shot on target, but it was parried away by Jamshedpur FC custodian TP Rehenesh.

Pilkington eventually doubled the lead in the 68th minute with a thumping finish off a Steinmann through ball, scoring his second ISL goal in the process.

The Irishman found himself with another chance to find the back of the net, this time off a neatly-placed Enobakhare through in the 79th minute, but his shot hit the woodwork and went straight into the arms of the keeper.

Jamshedpur FC went all out to reduce the deficit in the final quarter and managed to pull one back through Hartley, who headed in Vanmalsawma’s cross in the 83rd minute.

The third minute of the second-half stoppage time saw Jamshedpur FC nearly equalise, but Paul averted danger by getting his glove on a goal-bound header from Nerijus Valskis, who earlier had another attempt on goal in the 63rd minute hit the woodwork.

In the end, SC East Bengal did manage to seal their third win this season and snap their five-match winless run. It helped them move one place up on the league table as they now stand ninth with sixteen points from as many games (three wins, seven draws and six losses).

Steinmann was adjudged the Hero of the Match for his goal and an assist.

Grant was perceptibly happy with the result. Speaking about Golui and Sourav Das at the virtual post-match Press conference, he said, “They were very good. We asked them to play with a professional attitude and they displayed that attitude. Their job now is to play even better next week. Now all they have to do is try and improve. But that was a great start.”

SC East Bengal play against Hyderabad FC next at the Tilak Maidan Stadium on February 12.