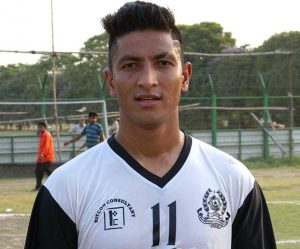 Mohammedan Sporting Club rode on Ajay Singh’s first half strike to beat LoneStar Kashmir FC 1-0 in their final round encounter of the Second Division League at the Synthetic Turf Stadium in Srinagar on Sunday afternoon.

Going into the game Mohammedan Sporting coach Subrata Bhattacharya (Jr.) made three changes to the side that played 1-1 against Minerva Academy FC on Thursday. Simbarashe Gate replaced James Moga who picked up a red card in the last match while Mumtaz Akhtar and Sheikh Faiaz made way for Bisheshwor Singh and Pritam Singh respectively.

Mohammedan Sporting started the match strongly and went ahead within three minutes into the game when their skipper Ajay Singh slotted home to give the visitors an early advantage.

Having scored, Mohammedan Sporting grew in confidence placing a flurry of attacks into the LoneStar Kashmir box. From one of those chances Simbarashe almost doubled the lead for his side in the 22nd minute but the Zimbabwean’s effort was blocked by the home keeper Harpreet Singh at the near post.

Seven minutes later Nagen Tamang tried his luck from a long range effort which sailed over the crossbar without giving much trouble to Harpreet.

The second half completely belonged to Mohammedan Sporting. The visitors attacked right from the word go and made the first attempt in the 52nd minute through Ajay who did well to control the ball on the right side before shooting towards the goal which missed the target by a whisker.

Thereafter, Mohammedan Sporting continued to dominate most of the proceedings but failed to increase the tally despite having some close chances as the scoreline remain unchanged at full-time, 1-0 in favour for the guest from Kolkata.

Mohammedan Sporting who now have 11 points from 7 games will take on Dempo SC next on Wednesday in Goa, which is another vital tie in the Second Division League to decide who gains promotion to the I-League.