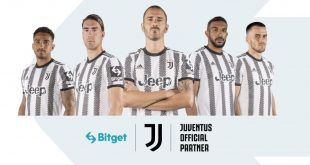 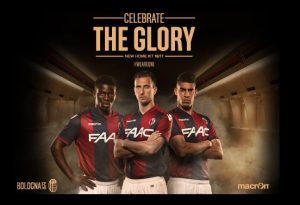 On occasion of the last Serie A home match against AC Milan, Macron and Bologna FC 1909 last night revealed the new Home jersey, which will accompany the Emilian football team during the Italian 2016/17 season.

Once again, Macron Style Department has collaborated closely with the Club in order to create a jersey capable of combining, on the one hand, tradition and innovation and, on the other hand, style sobriety with attention for sartorial details, which is a distinctive feature of Macron, European leader in the production of active sportswear.

In fact, the new jersey maintains the traditional colors of Bologna FC, with the classical vertical red-and-blue stripes, with sublimation printing, but, at the same time, it always distinguishes itself, thanks to the tailoring work of Macron, which takes care of style and wearability (slim) in detail. The tradition of Bologna FC is sealed on the jersey with BFC acronym, embroidered on the back of the collar, and with the Club Shield, embroidered on the left chest area.

As confirmation of the success of the new feature introduced in the last season, the back neck of the jersey presents the famous motto “Lo squadrone che tremare il mondo fa”, coined after the cycle of major successes of the Club in Italy and in Europe in the Thirties.