Second-half masterclass from Hyderabad FC to brush aside Chennaiyin FC 3-1! 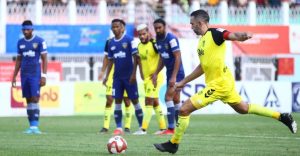 Hyderabad FC registered back-to-back victories in the Durand Cup as they beat fellow ISL side Chennaiyin FC 3-1, in a thrilling evening at the Khuman Lampak Stadium in Imphal on Friday.

Anirudh Thapa (42′) opened the scoring for the Marina Machans but Joao Victor (56′ penalty) and Bart Ogbeche (64′,74′) helped Hyderabad FC fight back and register all three points from this crucial clash.

This win takes Hyderabad FC to the top of the table in Group C of the Durand Cup, with six points to their name from their first two games.

Manolo Marquez made up to eight changes to his Starting XI from the previous game and it was evident as the men in Yellow and black took their time to get going.

The game had a slow and sedate start, as neither team managed to create a clear opportunity until Thapa popped up inside Hyderabad FC’s box to somehow convert a long ball from the midfield minutes before half-time.

This left Hyderabad FC a goal down going into the break and the Head Coach ringed in the changes. The likes of Bartholomew Ogbeche, Sahil Tavora and Nikhil Poojary all came on and had an immediate impact on the game.

The first goal arrived when Akash Mishra’s cross was headed down by Javi Siverio and was blocked on the goal line by Fallou Diagne. The Chennaiyin FC player was sent off and Hyderabad FC were awarded a penalty, that skipper Joao Victor converted with style.

Chennaiyin FC were down to 10 men and Hyderabad FC piled on the pressure, constantly creating chances after the hour mark.

And it was a set-piece that gave us the lead. Mohammad Yasir from 30-yards out on the right floated one into a dangerous area and Ogbeche was left unmarked. He headed in from close range, before adding a third just ten minutes later.

The depleted Chennaiyin FC side found it too tough to handle as Lalchungnunga Chhangte, who came off the bench, set up Ogbeche for a bullet header to double our lead.

Petar Sliskovic hit the bar and Chennaiyin FC created a couple of half-chances at the death, but Hyderabad FC managed to hold on to take all three points from a testing tie here at the Khuman Lampak Stadium.

Manolo’s men are back in action when they take on home-side NEROCA FC here on Tuesday, August 30.