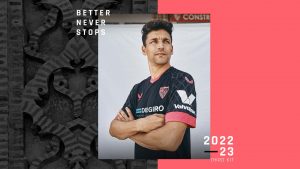 Sevilla FC continue to strengthen their ties with the city of Sevilla thanks to this season’s Castore-made kits. After unveiling their first two kits, both in the traditional colours of white and red respectively, it is now time for the Third Kit.

It features patterns of the Giralda, the great symbol of the city of Sevilla, in its design. The most iconic monument of the city is mentioned in the club’s Centenary anthem, and will now appear on the jersey as well.

The design, which is predominantly black, continues to be a response to the Sevilla fans’ desire to see their kits differ from other clubs’ kits.

If the home and away kits appealed directly to the fans by referring to the city under the slogan “Tailored to Sevilla”, the third one will be even more iconic, due to the great importance of the monument that inspires it.

After the great success of the first two designs, which has been reflected in the widespread popularity in the official stores, it is now the turn of the third kit.