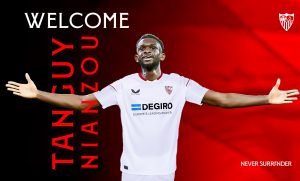 Sevilla FC and Bayern Munich have reached an agreement for the transfer of Tanguy Nianzou.

The French centre-back, who is Ivorian descent, is joining the club on a five-year deal after making 22 appearances in all competitions last season for the German Bundesliga champions.

Nianzou’s professional career began at Paris Saint-Germain, his hometown club, back in December 2019 when he featured in a 3-1 win against HSC Montpellier aged just 17.

He made a further twelve appearances that season, including two UEFA Champions League appearances against Galatasaray and Borussia Dortmund. His first professional goal came in the French League Cup against Reims, and a few weeks later he scored a brace away at Amiens in Ligue 1.

When his contract expired in June 2020, he joined Bayern Munich on a four-year deal. His debut came a few months later in a 3-1 win against VfB Stuttgart. A further five Bundesliga outings followed that season.

He featured more regularly last season, with 17 appearances in the Bundesliga, four in the UEFA Champions League and one in the DFB-Pokal. His first and only goal came in a 4-0 win over Union Berlin back in March.

At international level, he is currently playing for France’s U-20 side, with twelve caps so far. He has captained the team on three occasions, and scored his only goal in a 1-1 draw with Portugal earlier this year. He also has caps at U-16, U-17 and U-18 level, including seven caps and a goal during the 2019 FIFA U-17 World Cup.

Despite being just 20 years old, Tanguy has an impressive list of honours. He was part of PSG’s domestic treble-winning squad of 2019-20, although he had left the club before they picked up the French Cup and French League Cup. They also reached the UEFA Champions League Final, but, strangely enough, they were defeated by Bayern Munich, who had signed him six weeks previously.

In his two years in Bavaria, he has picked up two Bundesliga titles and two DFL-Supercups, and, at international level, he was part of the France squad that came third at the 2019 FIFA U-17 World Cup.

Nianzou is the latest French centre-half to join the club, following in the footsteps of compatriots such as Julien Escudé, Sébastien Squillaci, Adil Rami, Clement Lenglet and Jules Koundé.