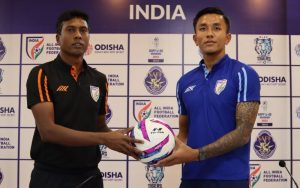 The SAFF U-20 Championship is all set to kick-off in Bhubaneswar from tomorrow at the Kalinga Stadium in Bhubaneswar, and the coaches of all the five teams across South Asia joined in on lauding the world class sporting facilities in the city.

Speaking to the media ahead of the start of the tournament, India head coach Shanmugam Venkatesh stated how prolonged access to such facilities have helped his team grow as footballers over a long term.

“We are prepared for the SAFF Championship and the boys are really motivated. For us, this will be a good preparation for the AFC U-20 Asian Cup Qualifiers, and all our players know the importance of taking it step by step as part of our development,” said Venkatesh. “I must thank the Government of Odisha for providing such world class facilities for the tournament. We have also been training here for a long time, and that has really helped the boys develop.”

Bangladesh U-20 side head coach and Technical Director Paul Smalley Thomas, who had also travelled to India earlier this year in the SAFF U-18 Women’s Championship, lauded the football organisers in India.

“I should congratulate the organisers for hosting us here in Bhubaneswar. The organisation of the tournaments here are very good. I have been here before as well in the U-18 Women’s SAFF, where we narrowly missed out to India, but it was very well, and you should all be congratulated for it,” said Thomas.

Sri Lanka head coach Rajamany Devasagayam feels that the climatic similarity between Bhubaneswar and Sri Lanka will translate into better performances for his players on the pitch.

“I think Bhubaneswar will be a good venue for us. The climate is exactly like how it is back home in Sri Lanka at this time of the year. The facilities that we have received are also top class, and I feel that we can do well here,” said Devasagayam.

Maldives coach Ahmed Shakir stated, “It’s a bit difficult in the age groups because we don’t have as much information on the other teams. But we are really impressed with the facilities that we have been given here. The boys are really motivated, and we hope to do well.”

Nepal coach Megh Raj KC feels confident about his team being one of the stronger units in the SAFF U-20 Championship, though he did admit that all the matches will be close.

“I believe that we are a very strong team in this tournament. But all the teams come with their own qualities, and I feel that all the matches will be tough,” he said.

The SAFF U-20 Championship kicks-off at the Kalinga Stadium in Bhubaneswar on July 25 at 4pm IST, when Nepal take on the Maldives. Sri Lanka and Bangladesh face each other at the same venue at 7pm IST on the same day.

Meanwhile, India begin their campaign on July 27, against Bangladesh at 4pm IST. The matches will be streamed Live on the Sportzworks YouTube channel and on the Eleven Sports platform.