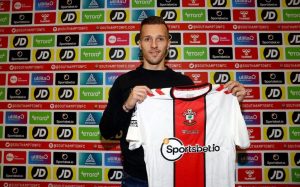 The club is delighted to confirm the arrival of the sought-after attacking midfielder on a two-and-a-half-year contract, as he becomes the first signing of the January transfer window.

Oršić, 30, brings with him a significant pedigree on both the European and international stage, most recently starring in the 2022 FIFA World Cup, where he played a major role in Croatia earning third place in the competition.

His fine tournament was highlighted by scoring the winning goal in the third-place match against Morocco, while Oršić also created his country’s extra-time equaliser in their famous quarterfinal win over favourites Brazil, scoring a critical spot kick in the penalty shootout of that game as well.

He leaves Dinamo Zagreb following a magnificent four-and-a-half-year spell with the Croatian giants, helping them win the top-flight HNL title in each of the past four years, while also becoming their leading European scorer of all time, with 28 goals across the UEFA Champions League and UEFA Europa League.

That included scoring in the 1-0 win over Chelsea in a Champions League group stage game last September – one of five goals Oršić scored in this season’s campaign – as well as a hat-trick against Tottenham in a Europa League last-16 tie in March 2021 that propelled his side into the quarterfinals.

In total, Oršić made 216 appearances during his time with Dinamo Zagreb, scoring at a remarkable rate, with 91 goals for the club.

Southampton FC manager Nathan Jones said, “Mislav is a significant addition to our squad and I’m delighted we have been able to get him in so quickly this month.”

“He’s a serious attacking threat and I’m sure anyone who has followed his progress or saw what he achieved at the World Cup will realise the talent he has. We’re excited to have him here.”

Mislav Oršić said, “I feel very happy to be here, I think it’s a dream for every football player to come to play in the Premier League and I’m here, I’m ready, I’m motivated and I hope that I will help the team to achieve their goals.”

“When I come here to the camp, it’s amazing, and I’m sure I will really enjoy my time here. Now it’s a little bit of a difficult situation for the club, but I think we need to stay together. We have only one plan – everybody to stay in the Premier League. We need to work hard every day and I hope that at the end of the year we will be happy.”