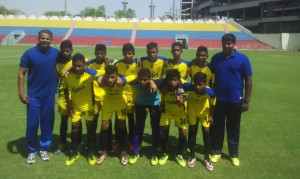 Goa came from a goal down to defeat Delhi 2-1 to book their place in the Semifinals of the ongoing 37th Sub-Junior National Football Championship at the Dr. Ambedkar Stadium in New Delhi.

Goa started the match on a good note and missed a scoring opportunity in the 2nd minute when Stewart Demello’s through ball found an open Kenneth Da Costa who shot inches wide of the goal. Delhi slowly began to control the tempo of the game and in the 7th minute, Delhi almost took the lead had Manav Sharma’s shot not been cleared off by a goal-line clearance by the Goan defence line.

Thirteen minutes later, Harsh Tomar’s shot from outside of the box went inches past Goa’s goal as Delhi upped their ante. Goa gradually got their heads around the Delhi game plan and initiated attacks of their own.

In the 27th minute, a Kenneth da Costa shot came close to taking the lead for Goa as it zipped past the right post. Two minutes later, Sneh Tyagi, Delhi’s goalkeeper made a top-notch save off a Stewart Demello’s powerful header from a corner kick taken by Harsh Patre to deny Goa a sure shot goal.

Changing over, Delhi took the lead when Manav Sharma capitalized on an uncanny Goan clearance and slotted his opportunity into the back of the net to give Delhi a solitary goal lead.

Goa, although created attacking opportunities and were not the ones lacking in penetrating the Delhi defence, lacked the necessary composure to finish off their chances as wayward shots became frequent.

In the 80th minute, Goa were awarded a free-kick from the edge of the penalty box but it was struck over the Delhi cross bar. Two minutes later, Stewart Demello latched onto a cross in the Delhi box and volleyed it home to equalize Goa’s deficit as the score line read 1-1.

Shortly after, Kenneth da Costa scored a magnificent goal as he jumped higher than his marker and volleyed the ball home to make it 2-1 for Goa. And at the end of time, the score line read 2-1 in favour of Goa.

Meanwhile in the day’s other match, Odisha trashed Meghalaya 5-1 to move into the semifinals. 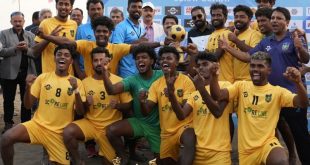