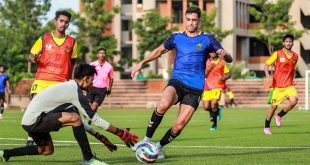 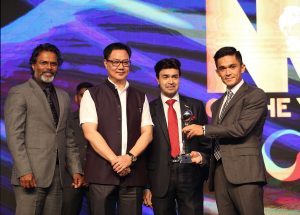 A new trophy designed by renowned jewellery designer Poonam Soni was also unveiled at the ceremony by Bollywood actress, Chitrangada Singh. Kiren Rijiju, Union Minister of State for Home Affairs of India was the chief guest for the evening and the event was graced by notable personalities including Indian footballer Sunil Chhetri, actress Chitrangada Singh, singer Akriti Kakar many more from the TV and Bollywood industry. Anukreethy Vas, Miss India 2018; Meenakshi Chaudhary, First Runners-Up; and Shreya Rao Kamavarapu, Second Runners-Up made their first appearances on the red carpet after winning the Miss India titles. The gala event was hosted by Sameer Kochhar and Mandira Bedi. The evening also witnessed a mesmerizing dance performance by Terrence Lewis Dance Institute.

NRI of the Year is India’s most distinctive awards recognising the outstanding achievements of the Indian diaspora globally. With their grit and perseverance, Non-Resident Indians (NRIs) have achieved tremendous success in various fields in the countries they have chosen to adopt as their homes. The awards were given in six different categories – Entrepreneur, Professional, Academics, Arts & Culture, Philanthropy, and Start-up, along with other awards such as India’s Global Icon Award Special Jury Award.

Upon receiving the award Sunil Chhetri said, “I am very happy to be a part of the 5th Edition of the Times Now NRI Awards. It’s a very different feeling to be a part of this kind of an event. I haven’t been to a lot of events where it is not just about the sport but the total package on how I have performed, an event where the achievements of global Indians are being celebrated. The Indians diaspora is celebrated globally and I am looking forward to receiving the Global Indian Icon Award in the sports category.”

Commenting on the Indian Football team he says, “We are greedy and want more. We must always keep improving. On a personal note I am always working on myself and my game and I hope that everyone who is a footballer only tries to improve themselves.”

Commenting on the 5th edition of NRI of the Year Awards 2018, M.K. Anand, MD and CEO, Times Network said, “Over the course of 5 editions, NRI of the Year, our flagship property has emerged as the most distinctive and coveted awards platform, instituted to recognize the achievements of the global Indians. It is an important component of our engagement with the Indian diaspora as a media group representing a nation with a global agenda. This year, NRI of the Year awards has set new benchmarks and it, indeed, is a matter of great pride and honor for us to recognize the indelible mark made by each one of them. I congratulate all the winners present here tonight and I’m sure their success stories will inspire a new generation of Indians.”

Vijay Chandok, Executive Director ICICI Bank said, “The ‘TIMES NOW & ICICI Bank NRI of the Year’ awards programme has completed five glorious years and it continues to grow in stature and relevance among the NRI diaspora. This year’s nominations have far exceeded last seasons’. This is an indication of the award’s growing popularity. Our association with this programme is a testimony to our commitment to the NRI community and the pride we feel on witnessing the overwhelming achievements of the NRIs across the globe.”

Atul Temurnikar, Co -Founder & Chairman Global Schools Foundation, Singapore said, “I have been working with expats and the NRI community for the last 16 years and have experienced the great contributions of NRIs and PIOs to Singapore. The NRI community has done lots of amazing work not only in social circles but also around the world. They have been an inspiration to many. Times Now NRI awards have recognized the talent and contributions of these achievers to the society. Such recognition has motivated other people to follow in the footsteps of these achievers and excel in their own fields.”

Naveen Chandra, Head – International Business, Times Network shared, “We are delighted that this year, NRI of the Year awards received an overwhelming 11500 registrations which is testimony of the high esteem the awards are held in. The journey over the last five years has been incredible and not only the awards become a gateway for accomplished Indians to contribute to India’s growth story and also our partners have expanded their international operations. As we move ahead, we hope to expand our footprint into new markets to reach the Indian diasporas and contribute significantly to India’s progress.”

Times Now & ICICI Bank NRI of the Year awards, powered by Global Indian International School (GIIS) captures the journey of global Indians who have kept the Indian flag flying high globally and continue to inspire other Indians. Ernst & Young is the Process Advisors for NRI of the Year awards and has been associated with the event since its inception. EY has defined the process for evaluating the entries received and facilitating winner determination. 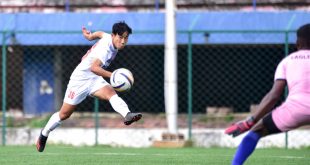