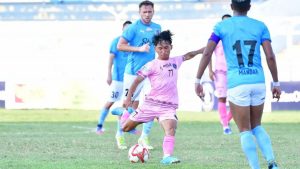 Mumbai City FC in a social media statement announced, “Mumbai City can confirm that the club has reached an agreement with Rajasthan United for the transfer of Gyamar Nikum.

The transfer is subject to a medical.”

There he was spotted by Rajasthan United FC, who brought him to their Academy in Bhilwara.

He has made some appearances for Rajasthan United FC in this campaign of the I-League and now moves on to Mumbai City FC, who paid an undisclosed substantial transfer and he would sign a long-term contract with the Islanders.

Mumbai City can confirm that we have reached an agreement with Rajasthan United for the transfer of Gyamar Nikum – subject to a medical.