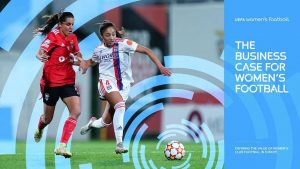 Ground-breaking UEFA report outlines the incredible potential of women’s club and league game in Europe, with commercial value set to reach €686 million by 2033.

UEFA today launched The Business Case for Women’s Football, a brand-new, forward-looking and practical report that highlights the potential for growth in the European women’s club and league game over the next decade.

A record-breaking UEFA Women’s EURO 2022 showcased the popularity and potential of international women’s football, but the game has also made huge strides at club level, with the successful launch of a new format for the UEFA Women’s Champions League with centralised marketing and TV coverage and ever-increasing professionalisation across domestic leagues.

In order to maintain this momentum, investors now have a unique opportunity to contribute towards the further development of the game. The Business Case for Women’s Football provides justification for that investment to all interested stakeholders.

Delivering on commitments outlined in Time for Action, UEFA’s women’s football strategy, this new report, which is based on an unprecedented range of research and data, provides comprehensive reasoning for increasing investment in women’s football and a clear methodology and explanation of its findings.

Focusing primarily on the club game, it gives a clear understanding of the sport’s potential for growth, outlines the benefits increased investment can bring and offers guidance on how to maximise return on this investment.

Giorgio Marchetti, UEFA Deputy General Secretary & Director of Football Division, said, “The Business Case for Women’s Football is a very ambitious project that has been developed in partnership with representatives from all football stakeholders including national associations, leagues, the European Club Association, clubs, broadcasters, sponsors, fans and academic institutions.”

“This report provides all of our stakeholders with a clear understanding of the benefits of investing in the women’s game, and provides them with clear rationale for increasing that investment.”

Nadine Kessler, UEFA Chief of Women’s Football, said, “Women’s football is on an incredibly exciting trajectory, with growth being seen across nearly every metric and across all of our stakeholders across Europe. The potential of the women’s game is limitless and we believe we are on course to take women’s football to heights that were unimaginable just a few years ago.”

Records are being broken, barriers are being torn down and new partnerships are being struck, resulting in rapid growth of the game.

Before now, data for stakeholders considering investment has been limited, inconsistent and incomplete. This report aims to provide clarity both in understanding the game now and quantifying return on investment in the future.

The Business Case for Women’s Football reveals a series of key findings, each of which demonstrate opportunities and returns that immediate investment can bring. As an example, the report identifies that women’s football could see a sixfold increase in commercial value over the next decade, potentially reaching an annual value of €686 million by 2033, with club sponsorship set to increase to €295 million in that time.

Women’s football is also considered to be inspirational, empowering and family-friendly, attracting a diverse, progressive and young fanbase that is set to grow from 144m to 328m fans over the next 10 years.

There is therefore a clear investment opportunity for leagues, clubs, brands and broadcasters to meet the increasing expectations of society and contribute significantly to the development and professionalisation of the women’s game.

Focused on sporting, commercial, image and engagement opportunities, The Business Case for Women’s Football identifies over 20 recommendations to inform club and league strategies and support stakeholders in developing the women’s game and maximising return on investment. These recommendations are grouped into five key themes:

– Raise standards and professionalism on and off the pitch

– Build on the unique strengths of the women’s game

After consultation with 42 leagues, 162 clubs, ECA and 11 commercial partners, as well as 30 in-depth interviews with top executives and consumer research across 14 markets and more than 20,000 individuals, this report provides an essential guide for any stakeholders wishing to develop the game and is committed to providing further bespoke support to clubs, leagues and national associations in order to maximise the growth of the game.

Previous Mirror Now VIDEO: What does the FIFA ban on AIFF mean for Indian Football?
Next More women take up the whistle in Papua New Guinea!