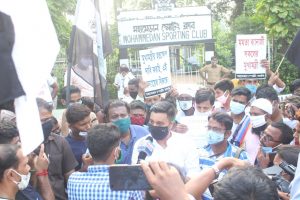 Today, August 3, the supporters of Mohammedan Sporting Club protested against the current ruling group of the club. Their claim was that on the first practice day of the season, a few supporters close to the club officials were allowed to enter the club and meet the players and coaches, where many supporters had been waiting in front of the club gate since afternoon despite heavy rain.

The Black Panthers began training at home on Friday, July 30 under new Russian coach Andrei Chernyshev. On the first day, hundreds of Mohammedan Sporting supporters from different parts of the state gathered in front of the club tent to watch the practice of their favorite team.

Although the practice was supposed to start at 5pm, the media was suddenly informed that the practice time has been postponed to 7pm due to bad weather. However, the supporters were not informed about any of that. They stood soaking wet in the pouring rain to catch a glimpse of their favorite players, but at the end of the day, supporters are told that they will not be able to watch the practice due to the Covid-19 protocols.

Supporters stated, if certain fans were allowed to enter the club, why the rest were deprived. The rules should be the same for everyone and officials should not discriminate among the fans.