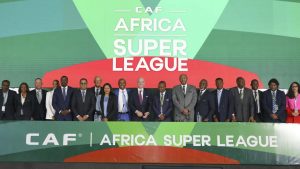 It is a new dawn as the Africa Super League was finally launched by the Confederation of African Football (CAF) President Dr. Patrice Motsepe in Arusha, Tanzania this afternoon.

CAF president Dr. Patrice Motsepe said, “The Africa Super League is one of the most exciting developments in the history of African football and the objective in terms of what we are trying to achieve is very clear, number one is to make sure African club football is world class and competes with the best in the world. This about the future of African football, this is about African taking charge of its future. To do this, we need money.”

“Football is about finance. It is about having a product and the commercial backing for it.”

“The success of club football is based on commercial viability. The Africa Super League for us is thee most important intervention to the development and advancement of football in Africa.”

“Football is a short career and football players have to maximize their earnings while they are playing. I have been involved with clubs for many years in African football, I understand the challenges.”

“African clubs have never had a good foundation, financially to keep some of the best players in Africa, to stay in Africa, from an income perspective, they love the continent, they want to be in Africa, so the financial part of club football is a critical issue and what we’re hoping to do is improve the quality of football. We need to get the spectators excited to watch local football so it’s as good as watching football anywhere in the world.”

Barbara Jaime Gonzalez, the Simba Sports Club CEO who attended the launch was very delighted about the development. “Football is about business and every time more money is coming in this is very positive. As a Club we are very happy that the Africa Super League has now been launched and we can’t wait for it to start next year,” says Gonzalez.

The CEO of the Tanzania Premier League side Simba SC added that having the Africa Super League will be another opportunity for clubs to be able to sale and buy players. “Having the new tournament will definitely open more avenues for clubs to make money and players to also benefit,” she added.

Jessica Motaung, the Marketing Director of South Africa Premier League side Kaizer Chiefs who also attended the launch equally welcomed the Africa Super League. “This is a great idea to have another tournament where teams can play and also make money. But let us wait for more details about the tournament,” added Motaung.

Siaka Chico Tiene, a Legend and former Cote D’Ivoire International also chipped in to welcome the new Africa Super League. “This is a great idea which will bring top teams to compete together and make money as well,” reasoned Tiene.

The 1st Vice President of the Federation of Uganda Football Associations, Justus Mugisha also observed that having the Africa Super League is a great development for the continent because it gives chance to have more competitions and bringing in more money. “Football needs money and having a competition that brings money means a lot,” added Mugisha.

The Africa Super League which will have a total prize money of USD 100 million, with the winner receiving USD 11.6 million will have all Zones represented.