Three points for Chawnpui FC against FC Venghnuai in MPL-9! 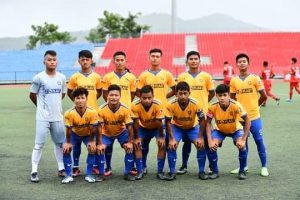 Chawnpui FC were able to earn their first win of the season as the were able to beat FC Venghnuai with a 1-0 win.

Lalliansanga scored the only goal of the game in the second half when he applied the finishing touches to a cross from the right hand side, making a crucial impact after coming on from the bench.

Chawnpui FC had came close earlier in the first half with Laltlanzova hitting the woodwork and FC Venghnuai Keeper Malsawmkima saving a freekick from Ephraim.

Venghnuai were also able to carve out chances through talisman Vanlalthanga as he came close twice, first forcing a good save and then hitting the bar in the second half.