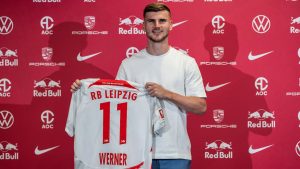 Germany international striker Timo Werner has decided to leave Chelsea FC to return to RB Leipzig after two seasons in the Premier League.

Werner became a full Germany international during his time with RB Leipzig, making his debut in a 1-0 win over England on March 22, 2017. Since then, he’s established himself as a regular for his country and has scored 24 goals in 53 international caps.

The Stuttgart native moved to English Premier League side Chelsea FC in summer 2020, where he celebrated his greatest sporting success to date. Werner was named in the starting XI in May 2021 as Chelsea FC defeated Manchester City 1-0 to lift the UEFA Champions League trophy. Later in the same year, Werner won the UEFA Super Cup and the FIFA Club World Cup with “The Blues”. Across two years in the UK, Werner made 89 appearances for Chelsea FC, scoring 23 goals and registering 21 assists.

Werner is a Red Bull once again and is expected to take part in the team training on Wednesday.

RB Leipzig commercial director sport Florian Scholz said, “Timo Werner’s signing is a special transfer for us. We had a lot of great years together in Leipzig that saw Timo become the club’s record goalscorer and a Germany international. His return means a lot to the supporters because Timo was a real fan favourite and figure of identification for a lot of people.”

“The transfer made a lot of sense to us, both because of Timo’s quality and the financial aspects of the deal. Now we want to build on the success that we started together and achieve our goals with Timo’s help. Not only does that mean qualification to the Champions League, but we also want to get as far as possible in the cup competitions.”

RB Leipzig technical director Christopher Vivell said, “Timo Werner is a fantastic striker who brings another dynamic to our attack thanks to his profile. His speed and finishing is fantastic; he’ll bring our attacking game to another level and above all, make us even more unpredictable.”

“Timo is a Germany international. He has a lot of experience on the international stage and knows RB Leipzig very well – he’ll take on a leading role here. We have a brilliant level of variety and depth in our attack and a lot of quality going forward.”

Timo Werner said, “I’m very happy to be able to play for RB Leipzig again. I had a great time here between 2016 and 2020, when we performed brilliantly as newcomers in the league. It was a dignified departure for me to leave the club as record goalscorer, but that’s in the past now and I’m looking ahead, because both I and the club have developed in the past two years.”

“I had two great years at Chelsea that I’m really grateful for and were crowned with the Champions League trophy. The experience to play abroad in a new league really helped me and my career. Now I’m looking forward to the new season with RB Leipzig and above all to meeting the Leipzig fans again, who mean a great deal to me. We want to achieve a lot and of course, I want to become the first Leipzig player to reach the 100-goal mark.”