Top international clubs play for the Audi Cup 2019 in Munich! 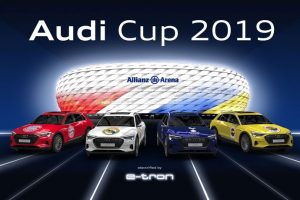 The tradition started exactly ten years ago: the first Audi Cup was held in 2009 as part of the celebrations for Audi’s 100th birthday. Since then, the Cup has become one of the best-known and most prestigious pre-season tournaments in Europe. FC Bayern Munich have won the trophy three times, while FC Barcelona and Atlético de Madrid have each held the top spot once.

The latest line-up could hardly get any better: FC Bayern Munich, Real Madrid CF, Fenerbahçe SK, and Tottenham Hotspur have among them brought home more than 90 league titles combined, more than 50 cup titles, and 19 UEFA Champions League titles, and the current season is not even over yet. “It’s great to see that the Audi Cup has been a firm fixture for new-season preparations among top international clubs for the last ten years now,” says Bram Schot, chairman of the Board of Management at AUDI AG. “This year’s participants not only promise two exciting days for all football fans, but they also provide an excellent example of how partnerships with Audi work in practice.” FC Bayern, Real Madrid, Fenerbahçe, and Tottenham, who joined the group in 2018, are all part of the Audi partner association.

The two semifinal games will be played on Tuesday, July 30. The first game of the tournament will see Real Madrid face Tottenham Hotspur, before FC Bayern and Fenerbahçe Istanbul go head to head later in the evening. The losing teams will play for third place on Wednesday, July 31, before the winners meet for the final. Kick-off is at 6pm and 8:30pm respectively, games will last 90 minutes, and – if necessary – be followed directly by a penalty shootout. “We are thrilled that the 2019 Audi Cup will again take place at the Allianz Arena,” says Karl-Heinz Rummenigge, chairman of the Executive Board at FC Bayern München AG. “The four teams promise exciting games and two brilliant days for our fans.”

The spectators will be able to watch all four teams play on both days. Tickets are available now at www.audicup.com. Day tickets start at €25. Two years ago, there were 123,000 spectators at the Allianz Arena on both days.

* Participants of the Audi Cup, as long as none of the teams are playing in the second qualification round of the Europa League, which will be held at the same time. 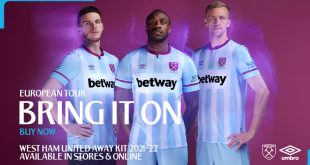 Primed and ready for the start of the 2021/22 season, UMBRO and West Ham United …