Trials to be held for FC Pune City Development Centre! 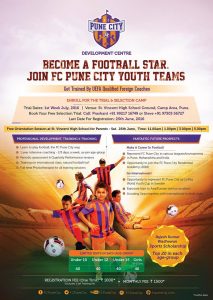 The trials would be held at the St. Vincent High School Ground in the Camp Area of Pune with the last date of registration being Saturday, June 25. On that they there will be free orientation sessions for parents and their children ahead of the trials.

The trials would be held in the Under-10, Under-12 and Under-15 boys besides Under-15 Girls categories with there being a one time registration fee of Rs 1,000 and a monthly fee of Rs 1,500.

Once selected the training would be conducted by UEFA Coaching License qualified coaches with each age group having up to 40 children in it and the Top 20 in each age group would be given the Rajesh Kumar Wadhawan Sports Scholarship.

The selected kids would represent FC Pune City in various leagues and tournament locally in Pune, across Maharashtra and India with an opportunity to join the to be set-up FC Pune City Residential Academy in 2018.

As XtraTime reports, Kolkata giants ATK Mohun Bagan are preparing for their next crucial ISL-9 …