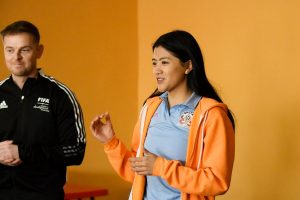 Qualifying for the last four in the 2022 SAFF Women’s Championship; collaborating with FIFA to host workshops; nine teams playing in the national women’s league. Development of the women’s game has indeed picked up pace over the past year in the Kingdom of Bhutan.

Particularly, the recent FIFA/BFF (Bhutan Football Federation) Women’s Fitness Coaches Workshop, which followed on from the FIFA/BFF Club Licensing Workshop in October, rounded off an extremely fruitful year for the South Asian country. Conducted by FIFA consultant Mark Arnot, the fitness workshop from November 21-24 was attended by a total of 23 coaches from the local women’s clubs and academies of Thimphu and Gelephu.

These two workshops, both first-ever of its kind in the Land of Thunder Dragons, showcased FIFA’s efforts of accelerating the women’s game worldwide in collaboration with Member Associations, a significant goal among the 11 pillars of its Vision 2020-2023. For Pema Choden Tshering, BFF’s Head of Women’s Football, FIFA’s support provides Bhutan – a nation of just 770,000 inhabitants – with a timely boost to their development of the women’s game.

“FIFA’s support is so quintessential for the women’s game’s development here,” said the 25-year-old who is also an active Bhutan international midfielder. “FIFA’s financial and technical assistance is highly appreciated. FIFA’s women’s development programme is such a wonderful avenue for us to capitalise on for the overall development of the game. We already have three projects approved (Club licensing, League development and Women’s football strategy) which are well underway.

“The FIFA representatives who have been attached to these projects have been so helpful in sharing their time, knowledge and experience with us. I am looking to seek [further] assistance and apply for the rest of the programmes.”

Tshering also hailed the recent Fitness Coaches Workshop which was part of the coach-capacity building under the League Development Programme that FIFA offers.

“We are needing fitness coaches and I thought this workshop has laid a great foundation for our coaches to explore further and gain some insights. It was a very fruitful workshop, and for the first time women’s health, particularly the impact of the menstrual cycle, was discussed.

“There was, most certainly, a lot of new knowledge gained, but most importantly, I was so proud and happy to see our male coaches take a keen interest to discuss, and learn more about the topic. For a conservative society like ours, this is a step forward and a reflection of the progress we are making.”

Tshering took over the BFF Women’s Football at the start of this year and in a sense, the appointment of a young footballer – potentially the youngest in the world in such a position – demonstrated how keen BFF are to develop their women’s game.

Hailing from a footballing family – her father is the President of Thimphu City FC and her brother a member of the Bhutan national team – Tshering has established herself as a current national team player having racked up ten international appearances and three goals. Despite the challenges of the new role, she is confident that the future of women’s football in Bhutan looks rosy.

“There is a growing interest in the women’s game here. This is a fact reflected in the increasing number of clubs and teams in our leagues [there will be a tenth team in our league next year] as well as at the grassroots levels. Meanwhile, the media reaction is growing. Of course, there is also support from the parents and family support is very important for a society like ours.”

“It was a tournament which goes down in history,” she said. “Our coach is all too aware of the grit and perseverance needed for the team to play well. She has stressed the importance of both physical strengths and mentality which I think this is very important for the team.

“In the long run, I would love to see our players garner overseas moves to play for good clubs. I also hope the women’s game continues to develop at grassroots levels. My vision is to establish a strong and sustainable player development pathway, build a strong team solely focused on the women’s game, and for our players to be able to make a living out of football. I want Bhutan Women’s Football to be the best in the South Asian region.”