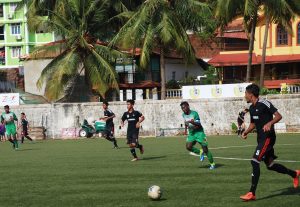 Pune FC downed Salgaocar FC in their final group fixture of the Under-21 Bandodkar Gold Trophy held at the Duler Stadium in Mapusa. The man of the match Ashique Kuruniyan led his side into the semifinals with a hattrick, Bhunthalun Samte scored the equalizer which had cancelled Naro Shrestha’s opening and only goal for the Greens.

The Goan outfit started the game on the front foot and Naro could have drawn first blood in the 10th minute. The striker received a brilliant cross from the right which he controlled and tried to send smashing to the left of custodian Anuj Kumar forcing a diving save from the latter.

The Pune FC lads were not to be outplayed without a fight. The combined trio of Omega, Balkar Singh and Ashique were haunting the Green citadel whose custodian Rohan Sheikh managed to keep the ball out as he pulled off some brilliant saves.

Salgaocar FC took the lead as the game crossed over the half-hour mark as a result of a well-played combination from Jason Barbosa whose through-ball from the right wing found Myron Borges who outsmarted a defender and found Naro who sent the ball smashing goal-bound only after it bounced off the gloves of Anuj. It wasn’t long before the equalizer was scored to keep things interesting. Ashique was the provider for the goal as his cross beat keeper Rohan and found Bhunthalun who only had an open goal waiting and to take advantage of which he did. The score remained at 1-1 as the referee called for half-time.

In the second-half Pune FC turned the heat up as they piled the pressure from multiple attacks. Rohan however was upto the task on multiple occasions as the custodian blocked a cunning free-kick and saved many close and some long-range efforts.

Ashique’s hattrick began in the 54th minute as the man in form struck leaving the opposition players and the crowd in awe. Liston was unable to capitalise on an opportunity to equalize as the forward received the ball from substitute Ronaldo Oliviera and after beating the defenders dribbled past an onrushing keeper had an open goal in front of him but he lost his balance and saw his shot travel wide.

Rohan denied Pune FC’s forward trio on multiple occasions but as the game headed into added time Ashique seemed to get a rush which translated into two goals to complete his hattrick. With a 4-1 score in their final game and leading their group with 7 points Pune FC enter the semifinals of the tournament.