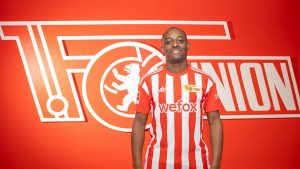 1.FC Union Berlin’s first transfer of the winter has been signed, sealed and delivered, with left-back Jérôme Roussillon making a permanent move to Köpenick from league rivals VfL Wolfsburg. For the 30-year-old Frenchman, it is his second side in Germany after four and a half years in Lower Saxony.

Paris and its surrounding areas are particularly known for tough street football, with countless great players taking their first tentative steps on the concrete pitches of the French capital. Roussillon is no exception. He grew up in Sarcelles, a suburb of the capital, where the stars Wissam Ben Yedder, Riyad Mahrez and the FC Bayern talent Mathys Tel all also come from.

But, the then 19-year-old did not sign his first professional contract in his homeland, but in FC Sochaux, a small town near the Swiss border better known for being the headquarters of car manufacturers Peugeot. The French first division club was in decline at the time of the transfer. In Roussillon’s first professional season, FC Sochaux finished in 15th, second season 18th. That meant relegation to Ligue 2.

After a year in Ligue 2, it quickly became clear that the now 22-year-old Roussillon was simply too good for the French lower leagues. First division club HSC Montpellier were first to notice and signed the nimble left-back for the 2015/16 season.

It was at HSC that “Roussi”, as he is called by friends and colleagues, started attracting international attention, playing 95 games over three seasons, scoring seven with seven assists.

All of which meant he landed on the radar of VfL Wolfsburg where Roussillon made 128 appearances in the Bundesliga, the DFB-Pokal and the UEFA Europa League and UEFA Champions Leagues, over four and a half seasons. He was one of the first names on the teamsheet for long periods.

“After four and a half years in Wolfsburg, I am now looking forward to a new challenge. I have already experienced the stadium and the Union fans a few times and I am really looking forward to it. I want to get the most out of myself here in order to deliver the best possible performance at Union and be successful with the team,” said Roussillon, explaining his move to Berlin.

For Oliver Ruhnert, director of professional football, the signing of Jérôme Roussillon marks another step in the right direction: “With Jérôme, we not only add more width in the squad, but also high quality width. In the second half of the season, with the chance of playing up to 32 games on the national and international stage, this quality across the board is essential. That’s why we are even happier that we were able to sign Jérôme in the winter.”