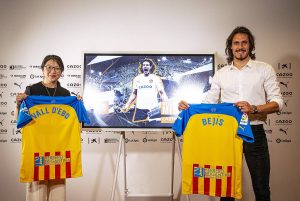 Valencia CF have reached an agreement to sign Edinson Cavani for the next two seasons until June 30, 2024.

35 year old Edinson Cavani is one of the best strikers in the world as evidenced by his goalscoring records.

Throughout his career, he has lifted 25 trophies and he has celebrated goals everywhere he has played, being named capocannoniere (top goalscorer of Serie A), as well as two-time Ligue 1 top goalscorer and European bronze boot winner.

Besides, he is one only of four players to have racked up over 100 goals in two of the five European big leagues.

Cavani started off his career at Danubio and in 2007 he moved to Italy. In Serie A he played for US Palermo and SSC Napoli. In 2013 arrived at Paris Saint-Germain. He had a seven-season spell at Parc des Princes where he became Paris Saint Germain all-time goalscorer.

Later on, in 2020 he joined Manchester United where he played for the last two seasons. Furthermore, he is also one of the Uruguayan national team’s greatest ever players, representing them at three FIFA World Cups and winning the Copa América.

This summer, he has become a new Valencia CF player. He arrives at Mestalla brimming with ambition and the desire to lead the line for Gattuso’s Valencia CF side.